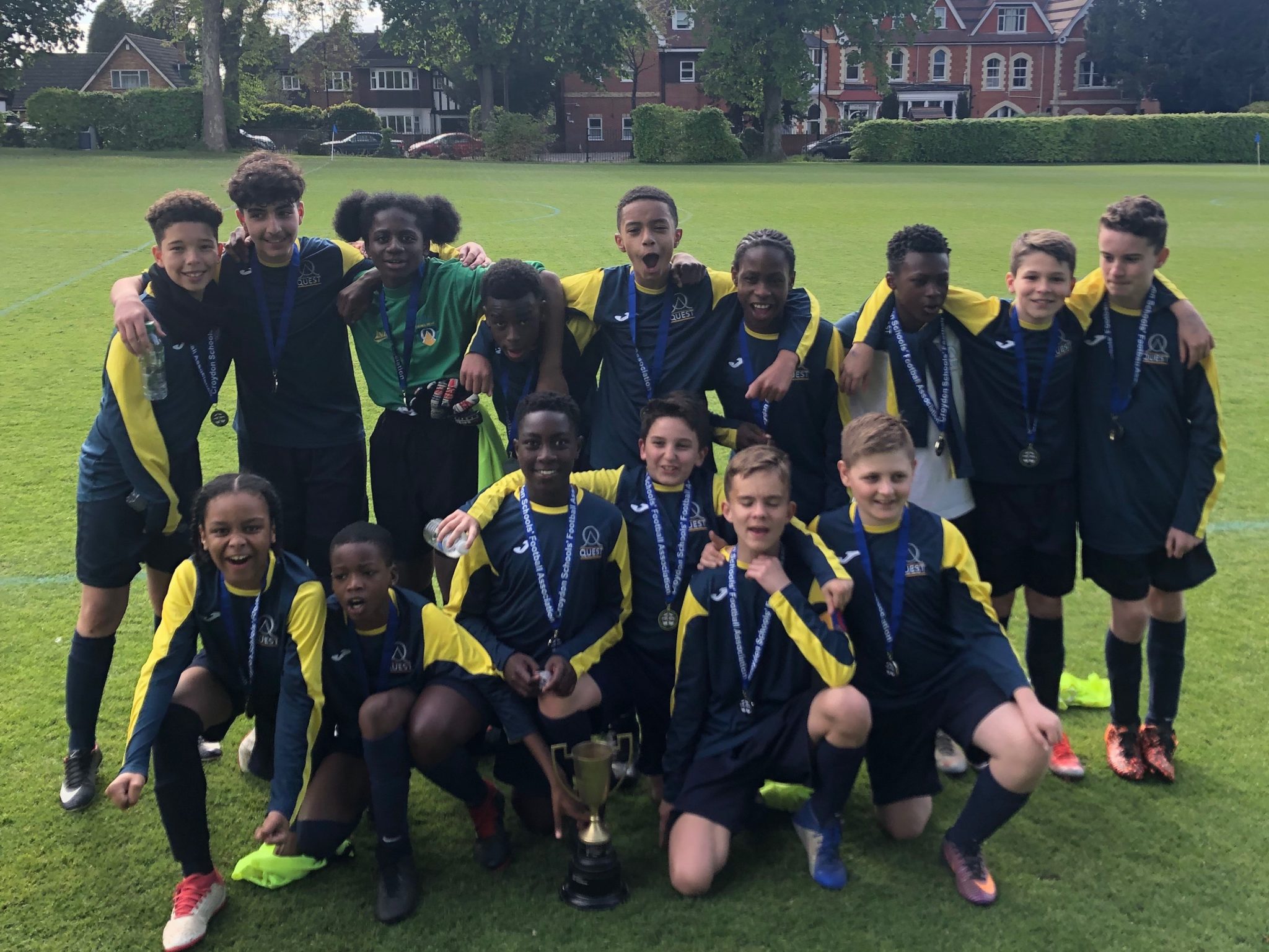 The year 7 Quest Academy football team finished their season off in style last Friday winning the prestigious Croydon Cup for the first time in the school’s history after a hard fought 1-0 victory over Harris CP down @ Whitfgift school.

There was not much in it from the start and it was clear to see that it would be a very tight game between two impressive sides for this age group. Quest had the better chances in the first half with the first real chance falling to Pedro S who was unlucky not to score after his cross/shot looped over the Harris GK and cannoned off the crossbar. This was followed by some lovely teamwork between Subbi n and Rizgar B which resulted in Subbi N getting a chance to shoot from a tight angle, but he was denied by the Harris GK. Harris briefly threatened at times in the first half, but Quest dealt with everything that was put on them, with Oscar M, Phillip H and Jaydon B all showing what classy defenders they are.

In the second half the game started to really open up and Rizgar B was unlucky not to score another screamer just like he did in the semi-final, after his rocket of a shot from outside the box was somehow tipped onto the crossbar by the Harris GK. Quest had other opportunities to score after finding themselves in some great attacking positions, but their decision making needed to be better at times to really take advantage of these situations. A prime example of this was when Phillip H went on another one of his marauding runs from defence, beating two players leaving Quest in a 3 on 1 situation. However the impressive Phillip H decided to shoot when maybe a pass to a team mate would have been a better option.

But with about 10 mins of the game to go, Quest took their chance! The ball was played into the box from a wide position. Harris failed to clear the ball and it fell to the feet of Pedro S who, on his starting debut, slotted home sending the Quest players and fans into jubilation.

Harris started to put us under pressure after the goal as they moved to a more attacking formation, but the solid George Ramses in the Quest goal was on hand to make a remarkable diving save to stop them converting their best chance with only minutes to go.

When the final whistle went there were joyous scenes with Quest parents running on the pitch to celebrate with their sons.

A massive thank you must go to the Quest fans who turned up in huge numbers to cheer the boys on. This was a massive help for the boys so thank you very much for your support!

This year 7 team has huge potential. They have won every game this season, congratulations on a truly remarkable unbeaten season boys. You should be proud of this historic double.

A huge congratulations must also go George Ramses A , Phillip H and Oscar M who were all scouted by Millwall this season with Oscar and George still both currently on trial!