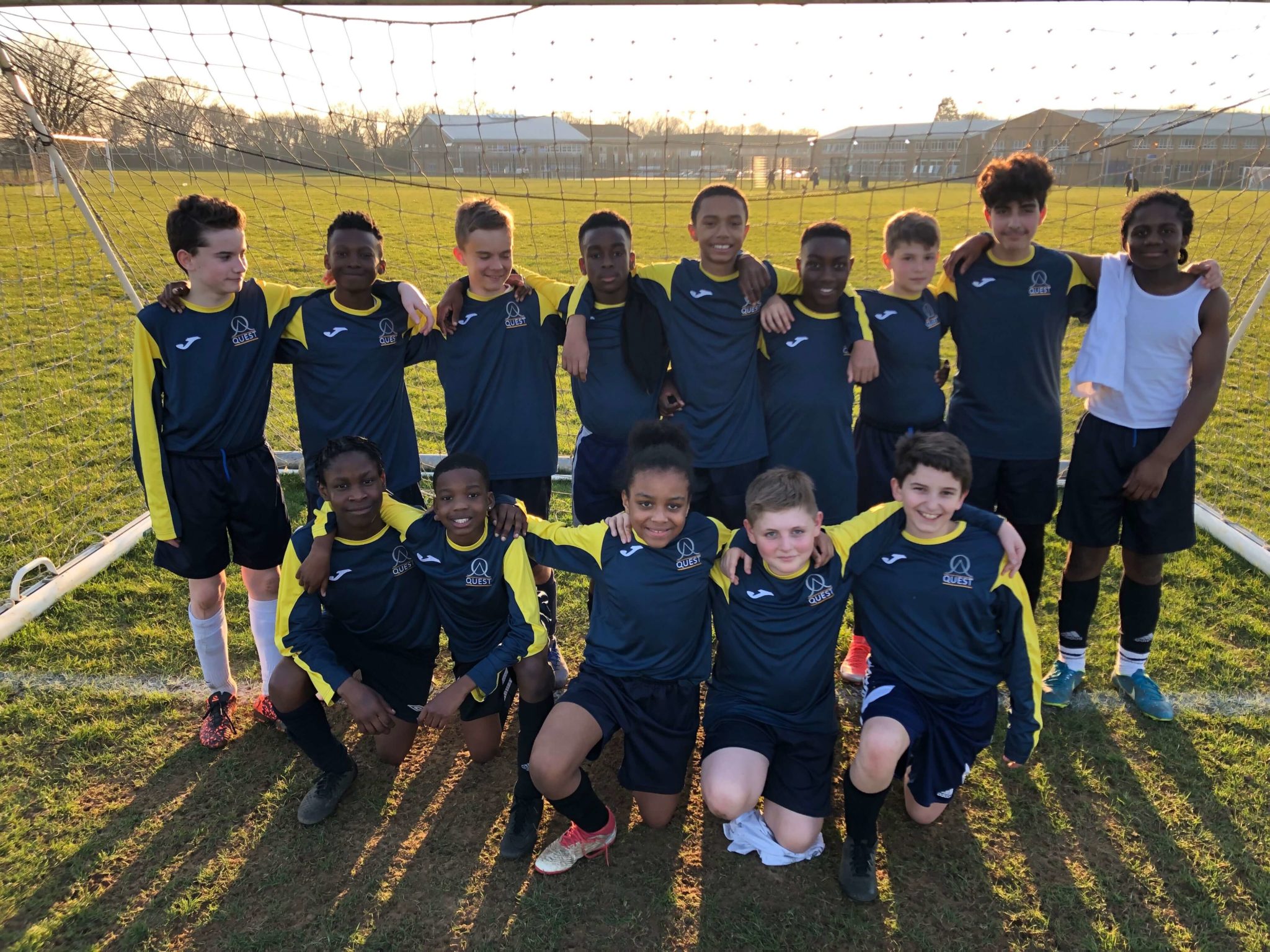 The year 7 Quest Academy boys football team cemented their place in the semi-final of the Croydon Cup, beating fellow collegiate partner school Riddlesdown A 6-1 in an eagerly anticipated fixture up at Honister Heights.

Quest took a quick lead when Phillip H made a marauding run from the right back position, outpacing two Riddlesdown players before finding himself in the opposition penalty box and squaring across goal to the oncoming Alfie P. Alfie P was once again in the right place at the right time to tap home giving Quest an incredible start 2 minutes into the game.

Riddlesdown equalised 5 minutes later to level the game at 1-1. It was from here Quest took charge and started to dominate showing more desire to win the ball and some really impressive technical play. Nathan N smashed home a superb penalty against Riddlesdown’s impressive Brighton Academy goalkeeper to make it 2-1 at half-time.

In the second half Quest continued their assault on Riddlesdown, dominating from start to finish. Riley S was on hand to score again with another cute finish to make it 3-1. The impressive Subby N then tapped home to make it 4-1. The moment of the match came when Subby N scored his second goal of the game to make it 5-1 with an unbelievable overhead kick direct from a Quest corner which had the fans and managers in disbelief. Cristiano Ronaldo and Gareth Bale watch out, you’re not the only ones who can do it! Nathan N then scored a superb goal striking the ball from the edge of the box with that sweet left foot leaving the keeper with no chance.

A special mention must also go to the defensive backline who defended superbly as a unit. They are really starting to give this team a solid foundation and they are becoming increasingly hard to break down each game that is played.

This was an unbelievable result for Quest against the much fancied Riddlesdown A who are renowned for being strong opposition. The year 7 boys are now 6 games unbeaten in all competitions this season and are well placed to complete an historic league and cup double.

George A 7/10:  Little to do in the game but when called upon was a safe pair of hands as usual. Could have done better with the Riddlesdown goal but he will be the first to admit that. He did not let this affect his confidence.

Phillip H 9/10: A fantastic assist for the first goal gave Quest an amazing start to the game. Got forward to help support the attack all game and won his tackles in defence.

Oscar M 9/10: Lead the defensive line with fantastic communication, organisation and commitment in the tackle. A rock in the centre of defence for Quest.

Jaydon B 7/10: Another solid performance from Jaydon. He did not have loads to do but when called upon he did exactly what was needed, winning his tackles and keeping possession of the ball. A lot more to come from this boy.

Aneillo L 7/10: Put his body on the line for his team again despite an ongoing hip injury. Only played 5 mins before being subbed because of this injury.

Rizgar B 8/10: Playing in a more deeper role, the midfield general performed admirably filling in for Aneillo when he went off injured. Was unlucky not to score after curling a superb free-kick towards goal which the opposition goalkeeper tipped onto the bar.

Subby N 10/10: What a performance from Subby. Scored two goals from midfield, one of which you will not see a better goal this season. A constant attacking threat, Riddlesdown simply could not deal with him. MAN OF THE MATCH

Alfie P 8/10: Again showed great positional play to score Quest’s first goal 2 minutes into the game. Pressed brilliantly from the front giving no time for the Riddlesdown defence to play out from the back.

Nathan N 9/10: Scored a brilliant penalty. Was unlucky not to score a free-kick and then smashed home his second goal to seal the game in the second-half. Also pressed brilliantly from the front.

Riley S 8/10: Came on for the injured Aneillo and put in a solid performance in midfield. Scored another important goal for the team.

Matthew H 8/10: Came on for Jaydon at LCB and performed brilliantly cutting out the danger in defence and keeping it simple in possession.

Pedro S 7/10: Came on in the last 5 minutes and ensured Quest kept it solid in defence. Worked hard and showed some impressive first touches.

Daqoun G 7/10: Caused problems in attack when he came on. First game back in team after being rested for the last game. Solid from Daqoun and still a lot more to come from him.

Zak Walker: Did not get on the pitch due to illness but still a vital player in this team.